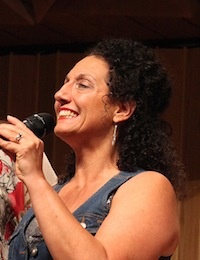 Kim Nazarian-Vocalist, Lyricist, Educator, Adjudicator, Clinician, and co-founding member of NYVoices. For the past 30 years Kim Nazarian has been harmonizing the world over with the New York Voices (NYV). In 2012 Ms. Nazarian was recognized as one of the top 50 most influential Armenian artists, and inducted into her High School’s Hall of Fame. Along with the many recordings Kim has made with NYV, she is proud to be one of the featured voices on Bobby McFerrin’s “VOCAbuLarieS” CD. Another professional highlight is Ms. Nazarian’s collaboration with the Smithsonian Jazz Masterworks Orchestra and the Manchester Craftman’s Guild on a concert tour dedicated to the late, great Ella Fitzgerald. Kim also enjoys being the lead vocalist for the Latin influenced band El Eco, led by Argentinian drummer, Guillermo Nohejowitz. Their latest CD, "Puerto de Buenos Aires" (Zoho Records) just earned "Album of the Year" by JAZZIZ's Mark Holston. Also, soon to be released in Oct. of 2018 on Zoho, is a project with Gabriel Espinosa, entitled "Nostalgias De Mi Vida". Ms. Nazarian released her own solo CD in Oct. of 2015, called "Some Morning". Her record was met with critical acclaim stating: "This set sets the gold standard for Jazz vocalists" from Midwest Records, Chris Spector; and BEST JAZZ VOCAL CD 2015 from W. Royal Stokes, Jazz Historian and Critic.
In the world of academia, Kim is the Skype/Zoom Jazz Teacher for the Vocal Jazz Majors at Ithaca College; an Artist in Residence at Tri-C Community College (Cleveland), and a regular visiting Artist at BGSU, LeMoyne College, and Moon Township HS. Ms. Nazarian has also made a name for herself in the A Cappella world as she serves on the jury in Graz, Austria for Vokal Total, and has ventured to Korea and China as a judge, as well. Kim has also had the pleasure of conducting the All State Choirs for NY, Ariz., Col., Wash., and soon to added Maine. When not making music, Kim loves to be home in Oberlin, Ohio with her family.......cooking and gardening.
www.KimNazarian.com 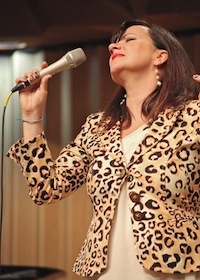 Vocalist, composer, arranger and educator Lauren Kinhan has been creating genre-merging music for over 25 years as evidenced on her contributions to the New York Voices lexicon and her own vibrant solo career which includes 3 solo outings showcasing her enigmatic compositions: Hardly Blinking, Avalon, and Circle in a Square.  In 2017 she released her fourth and first all-standard all rave review, A Sleepin’ Bee, which pays loving homage to Nancy Wilson.  Her musical ideas shake up the confines of traditional jazz, pop and everything in between, offering instead, the listener a “pastiche that is hip, intelligent and vibrant” (Christopher Loudon, Jazz Times).  Legendary Phil Ramone simply described her as a true songstress when making her debut recording, Hardly Blinking.  Her songs and arrangements can also be heard on other unique projects - Moss and JaLaLa - comprised of many of today’s current jazz superpowers, unified to create rare books of short stories, so to speak.  “Brilliance in interpreting ballads, off-the-cuff maneuvers in bluesy and bawdy environments, whip-smart interactions with the instrumentalists," (Dan Bilawsky, Allaboutjazz) that’s Lauren in her element.  And as an in demand teacher, adjudicator and faculty member at the esteemed NYU, she is playing her part in shaping the next generation of creators with her loving knowledge and mentorship.
www.LaurenKinhan.com 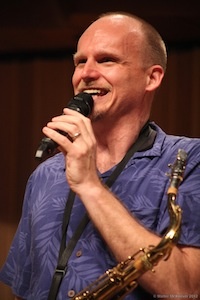 Recognized in both the jazz vocal and instrumental worlds, Darmon Meader is a highly respected vocalist, arranger and saxophonist.  Darmon has achieved international recognition as the founder, musical director, chief arranger, composer, producer, saxophonist, and vocalist with New York Voices.  As a member of New York Voices, he has released numerous recordings on the GRP, RCA/Victor, Concord and MCGJazz labels.  In 2013, NYV will release two new CDs: New York Voices, Live with the WDR Big Band Cologne and their long awaited Christmas CD, Let it Snow, both of which feature Darmon’s extensive arranging skills.  In 2008, Darmon released his much anticipated debut solo CD, And So Am I.  This solo project is a collection of jazz standards and original works, which reflects his varied interests and skills as a singer, saxophonist, writer and arranger.
With New York Voices, Darmon has collaborated with a variety of artists including Ray Brown, Mark Murphy, Bernadette Peters, Ivan Lins, Bob Dorough, Don Sebesky, Nancy Wilson, Ann Hampton Callaway, Jim Hall, Paquito D’Rivera and the Count Basie Orchestra.  He has toured internationally, performing at such renowned venues as Carnegie Hall, North Sea Jazz Festival, Montreal Jazz Festival and Blue Note Jazz Clubs (New York and Japan).  In addition to Darmon’s New York Voices touring and recording commitments, he is increasingly busy as a soloist, sideman, studio musician and composer.  Darmon continues to be actively involved in music education, working as a clinician and guest artist at both the high school and university levels.
www.DarmonMeader.com 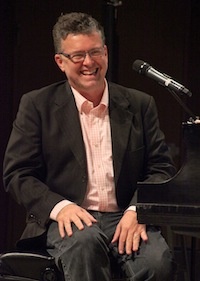 For years Peter Eldridge has remained at the forefront of both the singer-songwriter and jazz realms as a vocalist, pianist, composer, and arranger. He has four critically acclaimed albums: Stranger in Town, Fool No More, Decorum, and Mad Heaven. His latest studio project, Disappearing Day, was released in July 2016 on Sunnyside Records and called "an out and out masterpiece” by allaboutjazz. Disappearing Day made many ‘best of the year’ lists, including Downbeat, Jazziz, and NPR. Some of Peter’s current projects include his first full-fledged musical with the working title of ‘The Kiss', co-written with Chicago playwright Cheryl Coons about the life, loves, and art of Austrian painter, Gustav Klimt; an upcoming recording of romantic ballads for voice, string orchestra and jazz trio entitled ‘Somewhere’, featuring pianist/arranger Kenny Werner and cellist Eugene Friesen; and Foolish Hearts, an acoustic duo featuring Peter with bassist Matt Aronoff.

Eldridge is also a founding member of internationally acclaimed vocal group, New York Voices. The group continues to tour internationally and has performed in some of the world’s most preeminent venues and festivals, including Carnegie Hall, Avery Fisher Hall, and the Kennedy Center, and has been involved in two Grammy-award winning projects with Paquito D’Rivera and the Count Basie Orchestra. New York Voices completed two new collaborative albums, the recently-released ‘Meeting of Minds’ with the Bob Mintzer Big Band, and the other with Brazilian singer/songwriter Ivan Lins and the Danish Radio Big Band. New York Voices is releasing its newest studio album in the Spring of 2019. Some of Peter’s notable collaborations include Bobby McFerrin, Fred Hersch, Becca Stevens, Chanticleer, George Benson, Michael Brecker, David Byrne, Jonatha Brooke, Kurt Elling, the New West Guitar Trio, Jane Monheit, the Swingles, Anat Cohen, Betty Buckley, Janis Siegel, Paula Cole, Jon Hendricks, and Mark Murphy.  Peter was head of the Manhattan School of Music’s jazz voice department for eighteen years and is now Professor of Voice at Berklee College of Music in Boston.
www.PeterEldridge.com 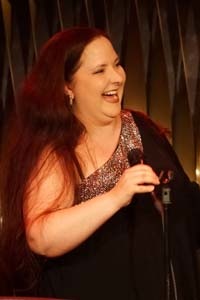 Anne Czichowsky, jazz vocalist, lyricist & educator, has established herself as a soloist and bandleader in various jazz projects and has won several national and international jazz awards. With her passion for scat improv and straight ahead jazz, she can truly be considered as a “keeper of the flame”. Her vocalese lyrics on instrumental solos attract international attention. Since 2009, she has released five albums, her latest release was a live album on HGBS Records with “Lines for Ladies feat. Sheila Jordan & Kristin Korb”. She performs internationally and has collaborated so far with Sheila Jordan, Kristin Korb, Darmon Meader, Önder Focan Trio, Gianluca Esposito, Oliver Mtukudzi, Willi Johanns, Martin Zenker, Bayan Mongol Bigband, Südpool Ensemble with Bernd Konrad and many others. Currently, Anne is the bandleader of four projects, performing regularly in Germany and abroad: “Anne Czichowsky Quintet”, “Quodlibetting” with Swiss-based singer Marianne Racine, “Round #2” with Swiss guitarist Michael Bucher and her female quintet "Lines for Ladies" with co-leader Sabine Kühlich. In 2011, she received the prestigious "Landesjazzpreis Baden-Württemberg", for the first time in over 35 years this award was given to a singer.
Anne is a popular and dedicated jazz vocal teacher, currently coaching the vocal ensemble of the Bavarian Youth Jazz Orchestra (LJJB) and regularly working as a guest teacher at the GMUB jazz study programme in Ulaanbaatar, Mongolia, a collaboration of the Goethe Institute and the Mongolian State Conservatory. Apart from many workshop & masterclass activities, she’s a docent for jazz vocals at the BfsM Krumbach music college, at the University of Music HMT Munich and also holds a lectureship position at Zurich University of the Arts (ZHdK).
www.annesingsjazz.com 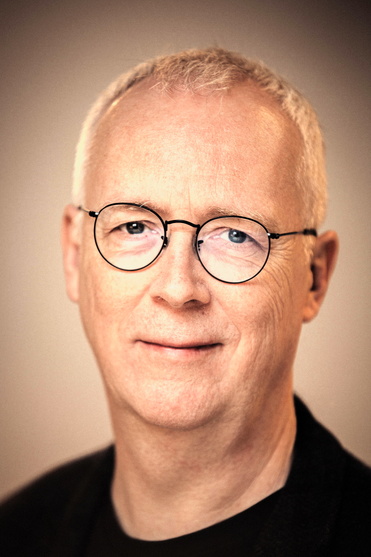 Peder Karlsson studied classical composition, arranging and guitar at The Royal Academy of Music in Stockholm, Sweden, from 1984, and graduated in 1989 with a post-graduate Diploma in vocal group performance.